As Wantmytip : “Hi little guys!”. So good, small in the affectionate sense of the term, do not imagine that I treat you all of dwarfs. Besides, when you think about it, it is not even an insult, in addition we have iconic dwarfs like Passe-Partout or Mimi Mathy… So, if you take it wrong you have to probe the bottom of your souls because it means that you are all “dwarfcists” somewhere!

What was the subject by the way?

Ah yes, today it is a Barstool Psychology devoted to the suckers, except that the suckers we quickly walked around. So I have extended the subject to other definitions that revolve around this one. So basically, instead of a definition in this subject, I will make four! Yes it is the balances of lucky guys with variable sizes! 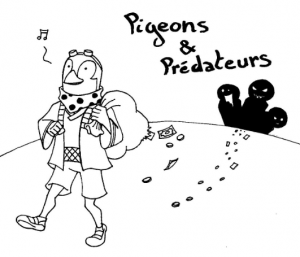 Very naive player who tends to believe everything that is said to him, never to check anything during a trade.
He does not know much about the value of the items, he is easily influenced, his level of mistrust on a scale of 1 to 10 is around -7.

If a sucker</ strong> is spotted in the area, then the hunt is open, it is going to be stolen in the feathers and it does not matter if it will end up in catch.
Let us now turn to the natural predators of the sucker:

Its goal? Make you spit more than you need.
He will not hesitate to make you believe that an item (stuff / pet … etc) is more powerful than it really is before you sell it, will voluntarily forget one or more 0 during a trade, Or to attempt unfair, eccentric exchanges.

He scans the good opportunities, like a vulture who seeks the opportunity of a good meal.
You forget a 0 in a sale? The profiteer will purchase the item and resell it.
Attention a good profiteer does not just do that!
An item becomes rare and is in great demand? the profiteer buy what’s left and put it on sale much more expensive!

Not to be confused with the hacker who is looking for your identifiers to empty your account.
The thief Use slyness in play to achieve its ends,
He can pretend to be one of your acquaintances to ask you for stuff he will never return, “borrow” items from his guild and run away, simulate the loss of his stuff for abuse the generosity of people, make believe that it is a novice who begins the game to beg in public place … etc.

You would have understood it, the scammer, the profiteer and the thief Are a beautiful skewer of dishonest people who exploit the loopholes of other players, not necessarily need to be a sucker to be a victim…

But sometimes it happens that a guy starts crying in the world to be robbed by a tricky stratagem like this guy who is totally unknown to me robbed my tyrant s4 r7 when I just wanted show him in exchange “, in this case which is the worst? the sucker or the villain?